How close are we to a vaccine?

“This all takes time, and if you cut corners and get it wrong, you kind of wreck it for everybody” 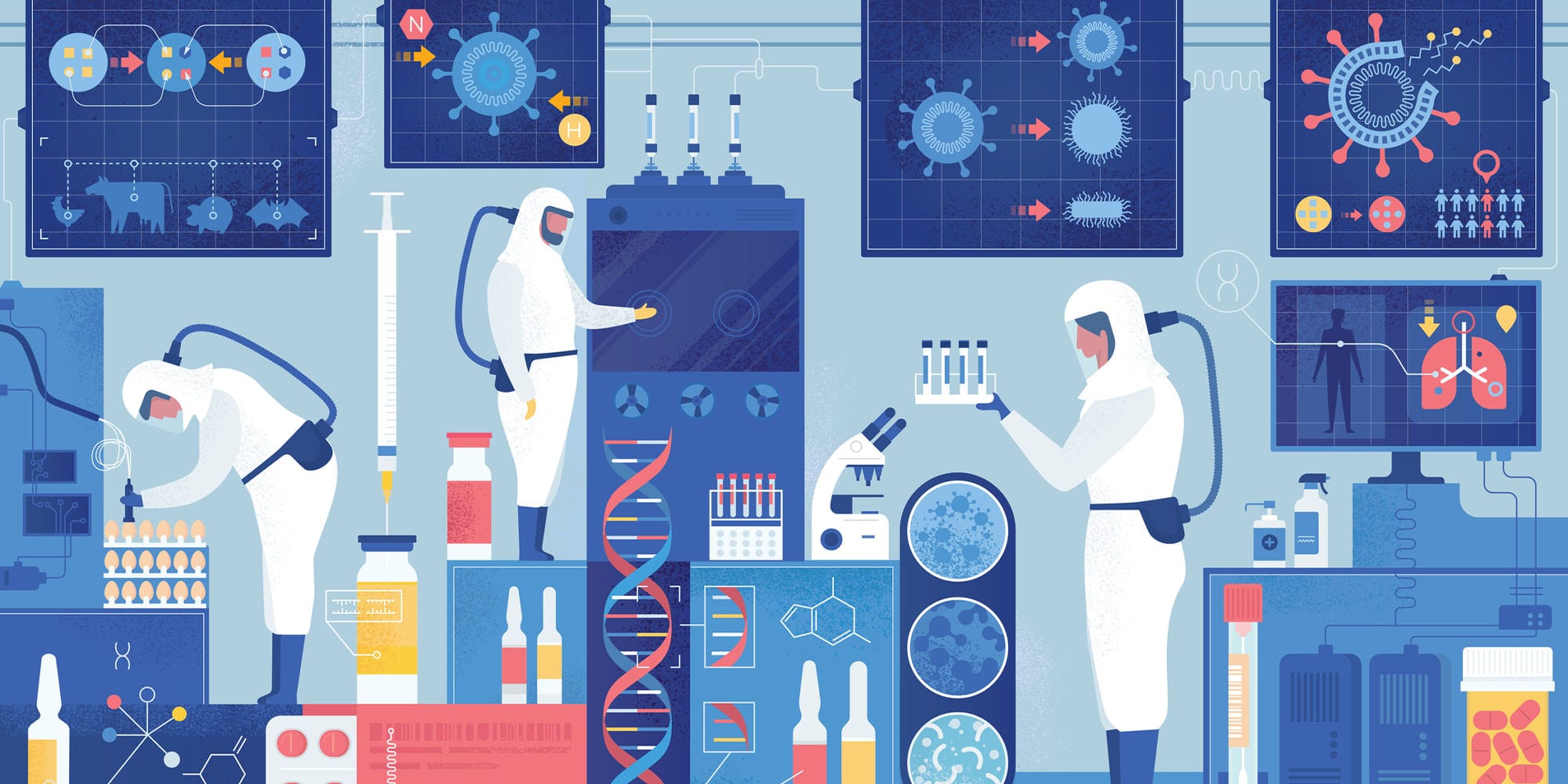 Scientists, governments, non-profits and private companies around the world are all furiously working to accomplish something that’s never been done before: create a safe, effective vaccine in roughly a year. That’s a bit of a daunting timeline when the previous record stands at four years (to develop the mumps vaccine) and when fewer than 10 percent of the drugs used in clinical trials wind up getting FDA approval. But there are more promising numbers out there, too — just six months after the emergence of COVID-19, nearly 150 vaccines are in development globally, 20 of them already in human trials. And with world leaders pledging billions of dollars to fund vaccine research, money really is no object. Here’s how a vaccine for the coronavirus will come together.

How exactly do vaccines work?

It’s pretty simple: a vaccine teaches your immune system how to make antibodies against a virus, so that when it actually encounters that virus out in the wild, an immune response is ready to go. “It’s like warming up before the big game,” says Rob Kozak, a microbiologist at the Sunnybrook Health Sciences Centre and one of the researchers who isolated SARS-CoV-2, the virus responsible for COVID-19.

There are a number of ways your body can go through that warm-up, and pretty much all of them are in development for this coronavirus. Most vaccines employ the virus itself, weakened so it can’t inflict any real damage, to stimulate antibodies that stop the virus from hijacking our cells. (This is how it’s done in the chickenpox vaccine, influenza vaccines and the super-speedy mumps vaccine, for example.) In June, a handful of whole-virus vaccine candidates moved to human trials in China; one of them, Ad5-nCoV, will be used in the Chinese military over the next year, and has been approved for human trials in Canada, as well.

Other approaches have zeroed in on a part of the virus — typically its spike protein, those crown-like protrusions that so ruthlessly gain entry to our cells — to provoke the same response. Gene-based vaccines do this by delivering a spike-protein playbook: engineered DNA enters our cells and transfers genetic instructions to messenger RNA (mRNA) molecules, which use the instructions to make spike proteins, so our body summons the necessary defences to ward them off. RNA vaccines skip the DNA altogether and deliver mRNA straight to the cells. It’s a new method of vaccination, promising but so far unproven, that’s being explored by a number of biotech companies, including Boston-based Moderna, French giant Sanofi, and Toronto’s Providence Therapeutics, which pivoted this year from building an mRNA vaccine against cancer to one against COVID-19.

Providence — like Montreal cell-therapy company IntelliStem — is also building a cell-based vaccine that harnesses T cells, rather than antibodies, to create more lasting immunity. (Antibodies tend to disappear from the blood stream after weeks or months, while T-cell protection sticks around for years.) “We express the spike and other proteins to the T cells to prepare them, so there is an army of T cells ready for the coronavirus,” explains Natalia Martin Orozco, Providence’s vice president of drug development. “That way, if there is an infection and the antibodies are not enough to prevent entry, those T cells would recognize the virus and come to the rescue.”

How can we be sure vaccines are safe?

There are three stages to clinical trials, each with their own protocols to make sure the vaccine is safe and effective for people. (Pre-clinical trials involve animal models, and human studies can only take place after those models show a successful immune response.) Phase one involves a small cohort of people, maybe a few dozen patients, who are monitored for major adverse reactions to the vaccine: high fevers, severe swellings, other unpleasant side effects. Any vaccine candidate that avoids those reactions can move to phase two, which expands the testing to hundreds of people, who are checked both for safety and, critically, for an immune response.

These safety trials can’t be bypassed: You need to recruit people, vaccinate them, follow them and analyze the data. “This all takes time, and if you cut corners and get it wrong, you kind of wreck it for everybody — people won’t have confidence in a vaccine,” Kozak says. But he adds that there has been a lot of effort during this outbreak to speed up some of the paperwork and regulatory processes.

IntelliStem is currently conducting animal studies, but given the urgency, Health Canada has already approved the company’s iterative six-month timeline to complete the first two human trials. “That means you do a small cohort of patients — say, 10 — for phase one, and if they are all healthy, you expand to another small cohort, and if they are safe, you add to them,” explains CEO Riam Shammaa. Typically, he says, phase one trials can take a year to complete, and phase two trials another 12 to 24 months, but with this “adaptive design of clinical trials, it’s anticipated we’ll have a good cohort of 90 to 100 patients after six months,” Shammaa says, a timeline that would be “revolutionary.” He adds, “We have to hit certain metrics of safety and show there is an immune response, but if we’re showing fantastic data, we can go and start saving lives.”

That’s the work of the clinical trial’s third phase, where thousands of volunteers are vaccinated and followed for longer periods of time. “To truly evaluate vaccine efficacy, you do need to have the potential for people to be exposed,” Kozak says. Volunteers won’t actively court COVID — they’ll continue to practice physical distancing, wear masks and maintain good hygiene — but they’ll be monitored to see how many of them become infected, versus those who received a placebo instead. “We need to make sure the vaccine is working — that’s the main question,” Orozco says. “And I would say, reasonably speaking, it will take probably two years.”

So how do we know that the vaccine is working?

That’s a bit tricky. Scientists are looking to see both arms of our immune system engaged, so there’s the presence of neutralizing antibodies as well as the longer-lived T cells. “You want to make sure your vaccine gets them both nice and excited,” Kozak says. But he acknowledges that, right now, we’re largely in the dark about what’s known as the correlates of protection, or the measurable signs of immunity. “We don’t know exactly what is needed to fully protect someone against SARS-CoV-2,” he says. We also don’t know how long immunity will last for — a year? 20 years? forever? — or what happens if SARS-CoV-2 mutates in the way of seasonal flus.

“Maybe you need more than the immunization — maybe you need a booster shot; maybe you need more,” Orozco explains. What if the antibodies that people have generated aren’t sufficient to protect against the next infection? Or what if a response to the spike protein isn’t enough to produce immunity? In that case, platforms like Providence’s and IntelliStem’s are flexible, so that they can swap in another protein if it seems more promising. “We don’t have to do the work from scratch each time,” Shammaa says. “I can repeat the process with any other part of the virus, so it shortens the process of vaccine discovery to a few weeks.”

Who owns a successful vaccine?

When it comes to confronting COVID-19, the scientific and innovation communities are collaborating in unprecedented ways — Kozak is quick to point out that he and his Sunnybrook colleagues isolated the SARS-CoV-2 virus thanks to some excellent pointers from their counterparts in Australia and China. But someone will be the first to develop a successful vaccine, and that brings with it the possibility of selling the intellectual property rights to the highest bidder, or putting the interest of one country first.

IntelliStem does have a patent on its technology. “Not having one means that after you do all the hard work, people will take the fruits and just copy it for dollars,” Shammaa says. But he says there are other ways to share that technology, such as licensing it or discounting the price of development. And Kozak has hope that the whole world won’t be chasing the same vaccine, but that there’ll be a number of options to choose from. “I really hope we have a couple of Canadian vaccine candidates,” he says. “Developing our own highly qualified personnel and technologies will also be useful for the next pandemic, as well as for our science and business communities in general. There’s not really a downside to it.”

Realistically, when can we expect a vaccine?

In congressional testimony in late June, the U.S.’s top infectious disease expert, Anthony Fauci, said he was cautiously optimistic that a vaccine could be available by the end of this year or the start of 2021. Kozak’s own optimism is a little more cautious than Fauci’s — he estimates it will take between one to two years develop a vaccine — and Orozco is more cautious still, doubtful the vaccine will arrive in fewer than two years. But the consensus among experts is that a vaccine is coming, and that, as Fauci says, it’s just a matter of “when, and not if.”