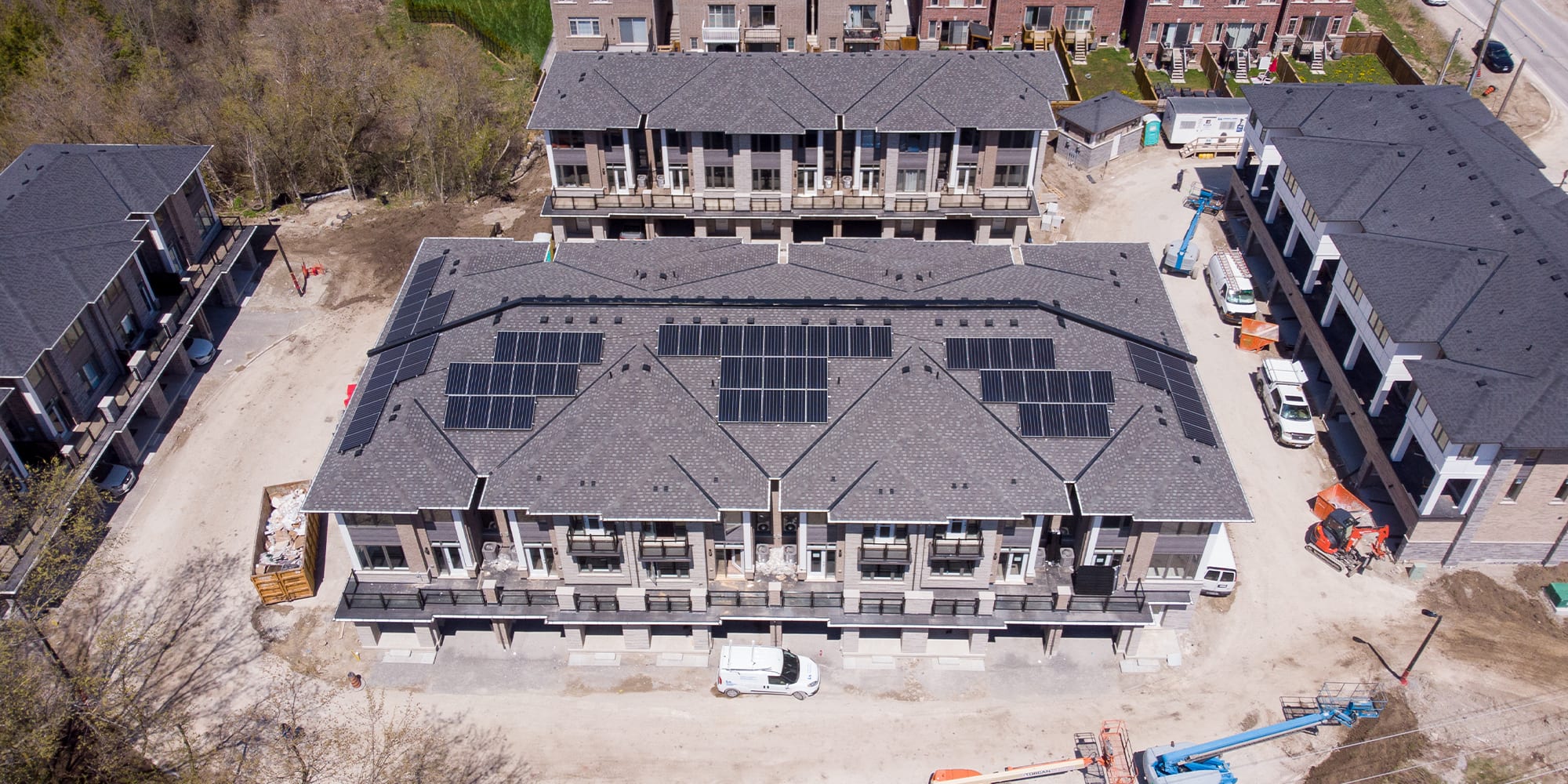 Within a few days of moving into his new townhouse, part of the recently built Altona Towns development in Pickering, Conor Soye was armed with recommendations from friendly neighbours about the best internet and TV packages in the area. But while the 27-unit neighbourhood may seem conventional — hello granite countertops, open-concept designs and two-car parking — there’s something unique going on under the hood.

Harnessing the power of the sun, the community is hooked into a microgrid, a localized electrical grid that saves homeowners money by augmenting their power supply and also providing backup power if there’s an outage.

Altona neighbours don’t just share cups of sugar, but their green power, too.

“It’s nice to be part of something that’s not been done before,” says Soye of the project, a first in Canada. “The reliance on greenhouse gas-producing energy sources is not sustainable. At some level, we’re going to need this on a bigger scale.”

Housing is a good place to start. Buildings and their construction account for 39 percent of energy-related CO2 emissions globally and 12 percent of the nation’s total greenhouse gas emissions — so any work that can be done to retrofit older buildings or to ensure new developments are sustainable can help Canada meet its emissions targets.

To that end, the federal government announced funding last June for the construction of energy-efficient residential buildings in B.C., Alberta, Saskatchewan and Ontario. And in April, Ottawa unveiled a $1.5-billion plan to boost green retrofits and upgrades of existing buildings and new construction of public institutions like community centres and libraries.

On the residential side, there are several notable recent projects. For instance, a new townhouse development in West Coquitlam, B.C. was outfitted with elements such as triple-glazed windows, thicker super-insulated walls and smart ventilation controls to prevent energy leakage. In Hamilton, Ont., a 17-storey apartment building built in 1967 was recently gutted and insulated — an easier, cheaper and a greener choice than tearing it down and starting fresh. And a super-efficient home that was recently built in Wakefield, Que. costs just $1.39 a day to run — including the ability to charge an electric car to make the 66-km round trip to Ottawa.

But these projects are either one-off retrofits or are focused on energy preservation rather than green energy creation. Altona Towns is the first new-build community to incorporate a green microgrid from the start. The neighbourhood is designed to reduce power cost and carbon emissions, increase power resiliency and show the potential of flexible energy systems. 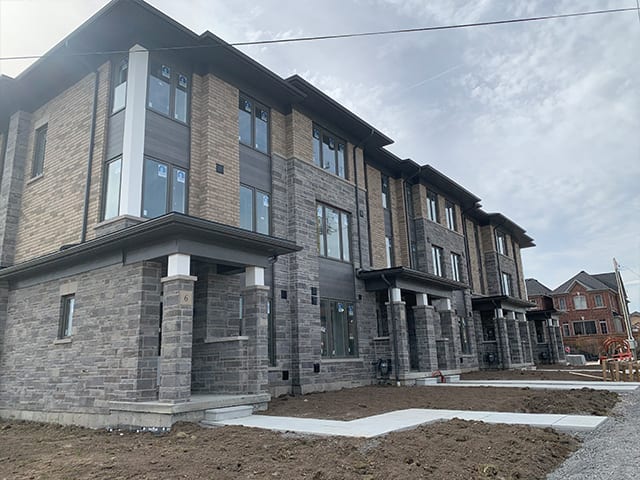 Hari Suthan, chief of strategic growth for Opus One Solutions, the Toronto-based software engineering company that is providing software support, says the project has benefited from recent quantum leaps in technology as well as lowered costs for solar panels, batteries and other materials. Even so, the industry has been playing catch-up compared to other types of technological innovation.

“We carry an iPhone or an Android that is 100 times more powerful than the first computers most of us used. And we carry them in our pockets like it’s nothing,” he says. “But when it comes to electricity and smart homes, that technology hasn’t actually moved as fast.”

Part of the challenge for a new green build project is simply getting so many players to the table, from municipal government to builders and utility companies that are willing to take the plunge — funding from Ontario’s Ministry of Energy, Northern Development and Mines was crucial to its development. Altona was four years in the making, with most of that time dedicated to planning. The builder, Marshall Homes, joined forces with Opus One and Elexicon Energy, the municipally owned electricity distributor, to get the job done.

Dugald Wells, general manager at Marshall Homes, said few builders were interested due to the complexity. Even conventional projects experience years-long approval processes and other setbacks. With the Altona project, there were technology and timing unknowns, too.

“We were probably one of the only builders around willing to even discuss something like this,” Wells says, mentioning he and founder Craig Marshall have long had an interest in creating sustainable communities. After initial conversations with municipal leaders, they reached out to Opus One and discovered the company was developing a concept-to-trial, community-scale microgrid. 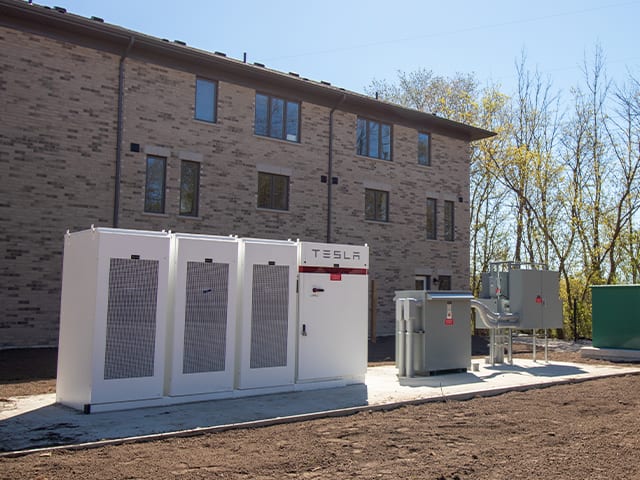 That interest will pay off for the new homes’ owners. For starters, there’s the 10 to 12 percent reduction to their electricity bill and the ability to have a smaller carbon footprint. The microgrid’s design includes a 25-kilowatt solar-panel array on the roof of one of the housing blocks, providing an estimated 10 percent of the total power needed to run the community. There’s also a powerful Tesla stand-alone battery tucked away out of sight that stores excess electricity. The microgrid is integrated into the regional power grid, but with its smart metering system the community can draw from it exclusively when needed. If there’s an outage, that backup power keeps critical loads running for hours.

“These people could spend many, many years never experiencing a power outage, or being aware of one, because their community just keeps humming,” says Wells of the homeowners.

A handful of the houses also have chargers to power up electric cars. (The technology is roughed in for the rest, if they choose to install later.) There’s also a pay-for-use charger available to the surrounding community, with funds going to the condominium. New owner Soye is now contemplating purchasing a Tesla vehicle. “Access to the source of power is definitely an attraction,” he explains.

Perhaps the biggest challenge of the entire project rested on how to charge for the combined solar power at Altona. While Ontario already has net metering systems for solar farms and single homes — solar-powered homes buy and sell energy back to utility company as they use, store or generate it — the provincial policies had no way to deal with a whole community producing power. In the end, with the support of utility company Elexicon and provincial agencies, the team came up with a smart billing system that reimburses homeowners equally. Marshall says provincial policy will have to change if there are going to be larger new developments in the future, though.

And one is actually in the works, already going through the zoning and planning process in Pickering. The 7,000-acre development could house up to 70,000 residents. Suthan calls Altona a “test bed” for that development: “As the world starts paying more attention to climate change, these communities will be leading edge in terms of how we should look at planning and building from the ground up.”

How a single hire can create a ripple effect