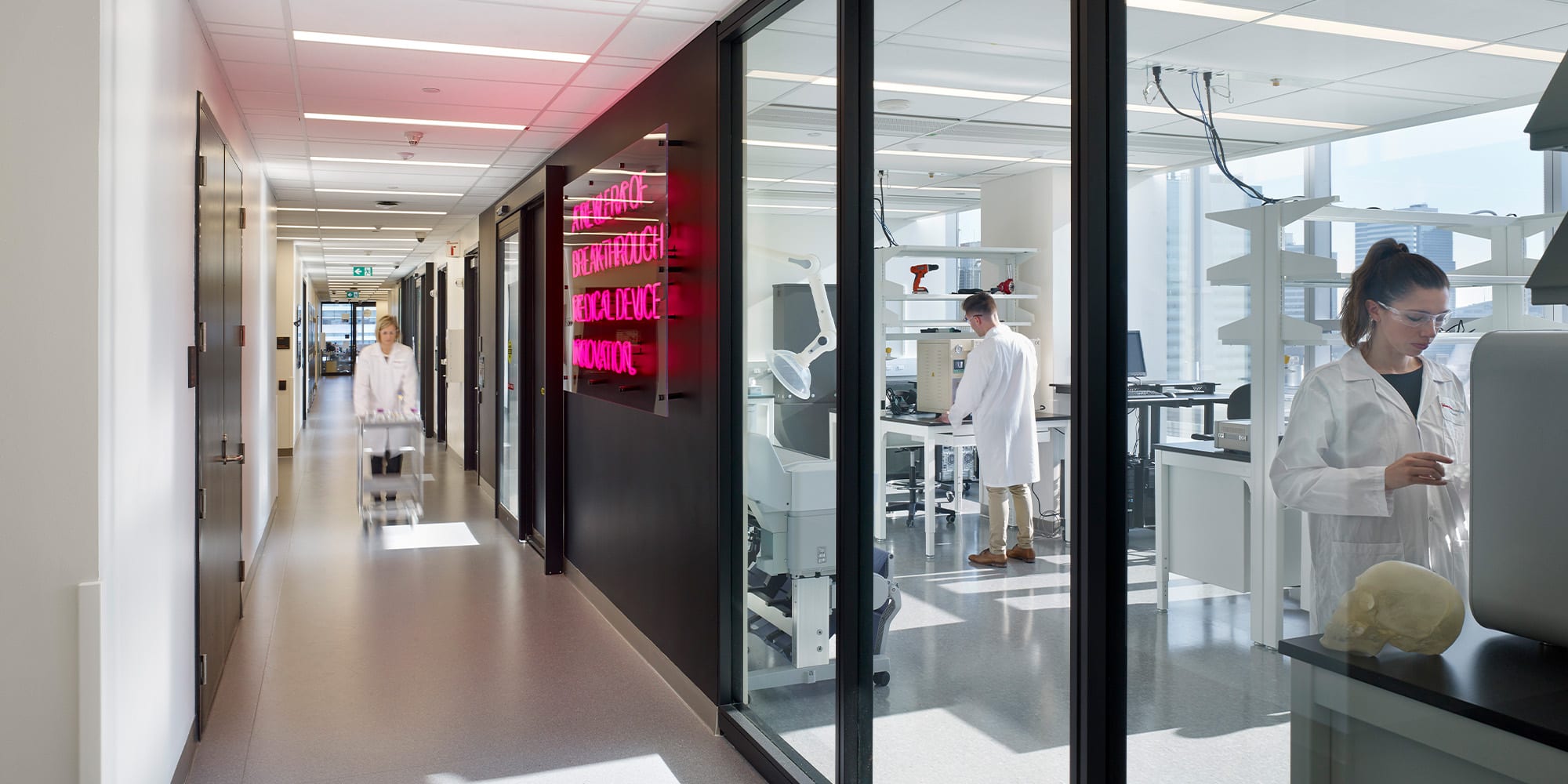 Much of the growth can be attributed to JLABS @ Toronto, which has helped hundreds of innovators develop and sell products the world over.

The numbers are impressive: $1 billion raised by Canadian life-sciences and biotech startups in the first nine months of 2020; more than $54 billion in annual revenue across 8,000 companies; and $100-million IPOs spurring thousands of new jobs. It’s amazing what change can happen in five years.

In 2016, Canada’s health-innovation sector was not quite the “hotbed” it is today. Despite having top research talent and institutions, it was difficult to turn academic breakthroughs into concrete, commercial solutions. Downtown lab space was also hard to find, and venture capital investments were relatively modest, especially when compared to the record raises of recent years. When it came to the health sector (and the social benefit of that industry), Canada was a sleeping giant. So, when Johnson & Johnson Innovation — JLABS was scouting for its first expansion outside the United States, “Toronto was the best and natural choice,” says Melinda Richter, global head of JLABS. “Being based within MaRS and the University of Toronto, close to the surrounding hospital ecosystem and the neighbouring financial district — it gave us the ability to deliver the greatest opportunity and impact for life-sciences entrepreneurs.”

JLABS’s impact in Canada has, indeed, been significant: 88 resident companies raising roughly $2 billion; nearly 1,000 meetings between residents and global investors; and dozens of deals with the larger Johnson & Johnson Family of Companies.

Speaking to JLABS @ Toronto startups (many of them serving double duty as MaRS-portfolio members), it becomes clear that such an injection of infrastructure and consulting, as well as connections to capital and customers, raised the quality and potential of the Canadian health community. And while COVID-19 is Canada’s current priority, open wet labs remain essential in the sector’s long-term fight against even deadlier diseases.

Here are some startup success stories from JLABS @ Toronto.

Tech like C.T. and nuclear-medicine scans are modern miracles, but the machines are giant and too expensive for the average doctor’s office. JLABS @ Toronto resident CorVista is changing that with its portable, I.T.-diagnostic devices. While the incubator’s free equipment was key to the company’s R&D, chief science officer Shyam Ramchandani found that the mentorship has been invaluable. He remembers when advisor Dr. Charles Bridges introduced CorVista to a Johnson & Johnson subsidiary operating out of Switzerland that was looking for a device to better assess pulmonary hypertension. The two companies quickly closed a deal. “The problems we’re trying to solve aren’t isolated to a country,” Ramchandani says. “Having JLABS colleagues around the world is huge for scientific study and collaboration.”

Avectas fortifies the body down to the cells

Every day we see how viruses can enter the body and manipulate cells. But what if you could engineer cells synthetically, and in the process, stuff them with life-saving medicine? Avectas is one of only a handful of companies exploring this mind-bending tech. “The key is to get sufficient cargo into the cells without damaging or perturbing them,” says Jessica Schwaber, the startup’s scientific director. JLABS’s bench space and tissue-culture rooms were designed for speedy experimentation, Schwaber says; regular conversations with the cohort, as well as with nearby hospitals and researchers, have also advanced her work. Headquartered in Kildare, Ireland, the Avectas team launched its Toronto outpost to take advantage of the city’s newfound status as a tech capital. “There’s a lot of untapped talent here and many Canadians are choosing home over the States,” says Schwaber who hails from Delaware. “I think Toronto is on the cusp of a discovery explosion.”

Frédéric Leduc’s elevator pitch is short, concise — and convincing: “We make guided missiles for the immune system,” says the CEO of Sherbrooke’s Immune Biosolutions. One of the first accepted to JLABS @ Toronto, Leduc’s company develops and sells tools to help researchers manufacture antibodies. These products have the potential to take on tumours and cancer cells, too. Team members were able to meet with investors and attend events while maintaining facilities in Quebec. Well-versed in academia, Leduc found the business-development and international-market advice most useful. “You need hubs to meet good people and be part of the action,” he says.

One day, humans will be able to regrow tissues and organs; and when that day comes, Endogena Therapeutics will be patting itself on the back. The Zurich-based company, with staff in Toronto and San Francisco, is a science pioneer, using molecules to help the body heal and regenerate itself from genetic maladies. “We needed more space and more support as we grew,” says Daphna Mokady, the startup’s vice president of discovery biology. “And the location and lifestyle and diversity of downtown Toronto was an amazing environment to nurture our staff.” Fresh off an $8-million raise, Endogena Therapeutics will be entering human trials on one of its retinal-health products later this year.