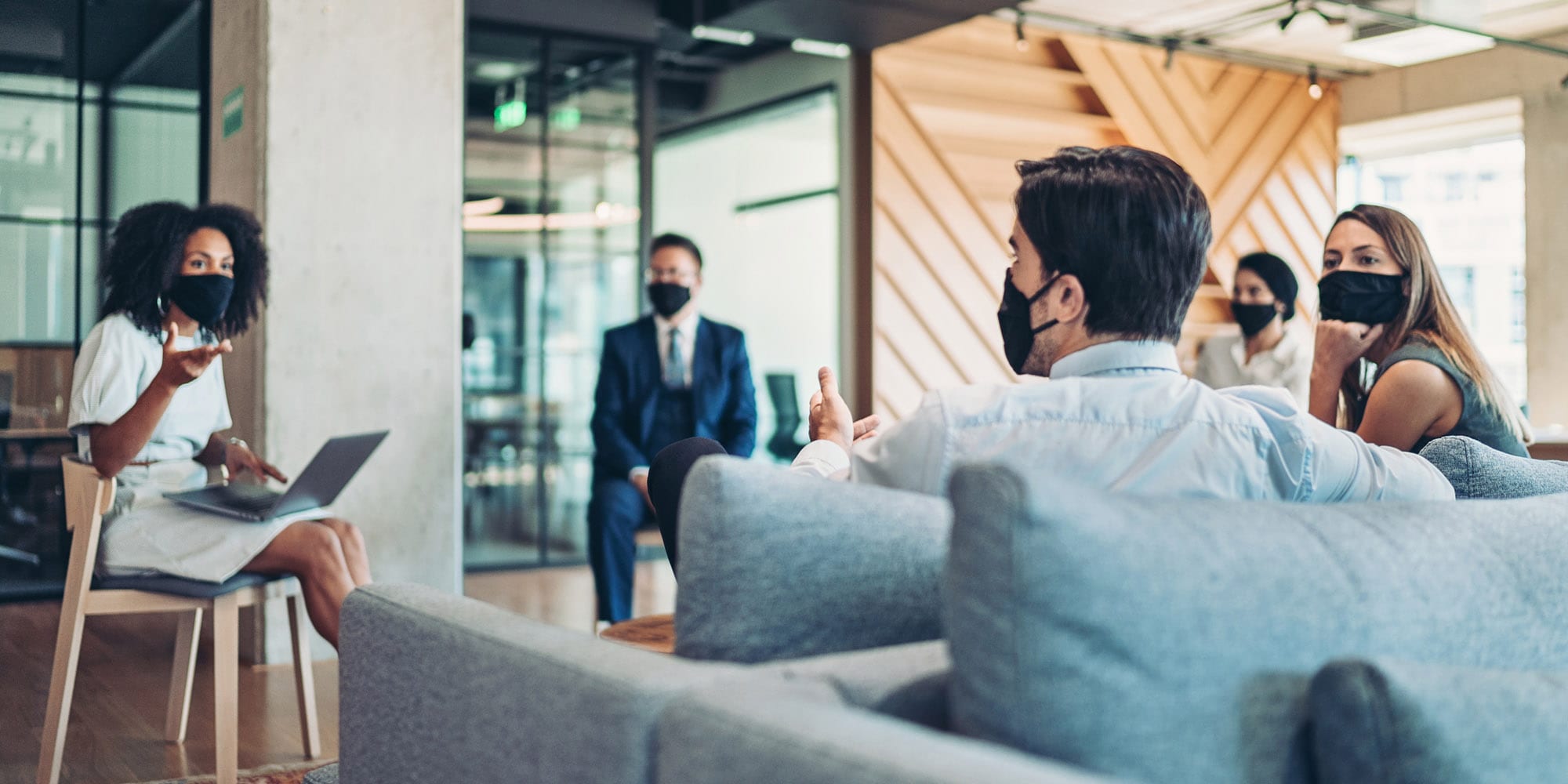 Up until last year, Axonify’s senior leaders felt pretty confident about their diversity and inclusion efforts. The Waterloo-based tech company, which develops a learning tool for frontline employees at such companies as Walmart, Levi’s and Merck, had always been intentional about promoting gender equality. In fact, it had become a differentiating factor for job hunters. “Female job seekers have told us they target Axonify as an employer because they feel they will have equal opportunity to progress their careers,” says Andrea Vrbanac, Axonify’s vice president of people and culture.

But last May, after George Floyd’s death at the hands of Minneapolis police officer Derek Chauvin and the resulting revival of the Black Lives Matter movement, Vrbanac and Sheila Thomson, the company’s people and culture business partner, realized they needed to be more intentional in other areas, too.

“We began hearing from our employees about how these events were impacting them,” Vrbanac says. “We knew that we needed to really build something, and it had to have legs. We didn’t want to have this as something that was just for the moment.”

Here, they share the steps they took and the impact it’s had so far.

“It was important that we have a resource person who would ensure we are being thoughtful in our approach,” Thompson says. “Many people in our organization are passionate about diversity and inclusion, but without that expert knowledge, we knew we wouldn’t be able to take our efforts where we wanted to take them.” So, Axonify partnered with equity, diversity and inclusion expert Michelle Grocholsky, founder and principal of consultancy firm Empowered EDI.

That was important in two ways: first, it showed real commitment because it required an investment. Adding a budget line for diversity, equity and inclusion (DEI) efforts is one way for companies to show employees and customers they are dedicated to this work. It was also important that Axonify did not rely on its own racialized employees to lead DEI efforts. While workers from equity-seeking groups are often passionate about improving diversity, it’s not only unfair to ask them to take on additional labour, it’s impractical. Racialized employees have lived experience, but they often don’t have professional experience designing DEI strategies, coaching individuals or facilitating training.

Grocholsky helped the company develop a sustainable DEI strategy, an employee survey and training. Currently, the company is working on a series of sessions that address unconscious bias, privilege, systemic racism and microaggressions, and have also started hosting “book club-style” sessions where employees can learn from one another.

Next, the company needed data.

With Grocholsky’s help, they developed an employee survey on inclusion. It was anonymous and covering everything from race, gender, spiritual affiliation and sexual orientation to family status, and disability status, including mental health conditions, as well as cognitive, visual, auditory and mobility disabilities. And it didn’t just collect data on diversity; it also included questions about equity.

“The equity questions focused on whether the employee had experienced barriers at Axonify. If they answered yes, they were asked more questions so we could understand where those barriers existed.”

The results were encouraging: 89 percent of Axonify’s employees said they felt diversity and inclusion were a priority at the company and 90 percent reported feeling like they belonged regardless of how they self-identified. But it did highlight a few areas where the company could improve, including “strengthening racial representation and taking purposeful action to attract a more diverse candidate pool,” Vrbanac says.

The survey also revealed something else: the company’s employees were super engaged with these issues. By the end of the first day, 80 percent of staff had responded and their final participation rate was 95 percent and even included employees who were on sick leave or maternity leave.

Get your employees involved

To harness that engagement, they launched an DEI committee that’s open to people from across the company from co-op student to executive.

“They’re a great cross-functional group of people who are really interested in taking things to the next level,” Thompson says. “It allows us to have that safe space to talk about things that can sometimes be uncomfortable. And that’s really allowed people to learn.”

The committee functions as an advisory council to Axonify’s people and culture team, which means they contribute to discussions around DEI and draft internal communications that recognize important social, historic and spiritual celebrations around the world. They’re also tasked with sharing information and resources around DEI topics with their respective departments.

Not every company has such engaged employees, though. And as we’ve heard for years, forcing reluctant employees to attend unconscious bias trainings doesn’t work. So, if you’re dealing with employees who aren’t as engaged with DEI issues, it’s important to consistently work to change your culture. One way to do that is to incentivize participation in diversity training, rather than mandating it; according to a study in the Journal of Organizational Behavior, employees who voluntarily take part in diversity training felt more invested in DEI.

Another is to create an environment of psychological safety for employees from equity-seeking groups, says Sybil Allen, a registered psychotherapist, facilitator and CEO of The Human Factor, a consulting company that helps businesses evolve into more equitable organizations. “When we talk about psychological safety, we’re talking about people feeling comfortable expressing their views and comfortable challenging the status quo without fear of negative consequences,” she says. For example, “Black employees may be very reluctant to speak because they’re fearful of the consequences, such as being labelled as the ‘angry Black woman’ or a troublemaker.” Creating a psychologically safe work environment requires leaders to explicitly invite feedback, work to foster trust and respect and acknowledge their own fallibility.

At Axonify, the process has been surprisingly smooth. “We haven’t encountered employees who haven’t embraced the journey,” Vrbanac says. “We have actually had more people reach out and want to learn more and share their experiences.” Instead, the company’s biggest challenges were around expectations. “Some of our community really wanted to take action quite quickly,” Thompson says. “But it was important for us to slow down and do things that were authentic, thoughtful and mindful. We needed a strategy that could also be realistic for what we could accomplish.”

For example, even though they started this process in June 2020, they didn’t settle on their strategic initiatives for 2021 until the end of the year, which they knew felt slow for some employees. Their solution was to be as transparent as possible.

They also offered a variety of ways for employees to learn and get involved, depending on their comfort and knowledge. DEI is a foundational value at the company, which means there’s a level of learning that’s required to be an employee at Axonify. They’ve rolled out unconscious bias training, but also knew that some people would need more learning opportunities and others would need more opportunities for action.

The impact of these changes is subtle, but recognizable. From a company standpoint, their 2021 plans are focused on making the company more attractive to a more diverse pool of candidates and more equitable for the company’s existing employees. They are working with the Black Professionals in Tech Network to “open up” their networking, so they can cast a wider net. They’re updating the wording on their job postings so they’re less focused on degrees and diplomas, since people attain knowledge through experience as much as through formalized education. And they’re also working to offer more support to employees with mental health conditions and embedding EDI into their HR practices, including “clearly articulating our selection, compensation, promotions and progressions in the workplace, so people understand what it means to progress within Axonify,” Vrbanac says.

Employees are changing, too, Thompson says. “What I’ve noticed is people are starting to think a little differently. They’re asking questions, and they’re feeling comfortable to ask the questions.”

Not just a fad: Lessons from Google on building inclusive products