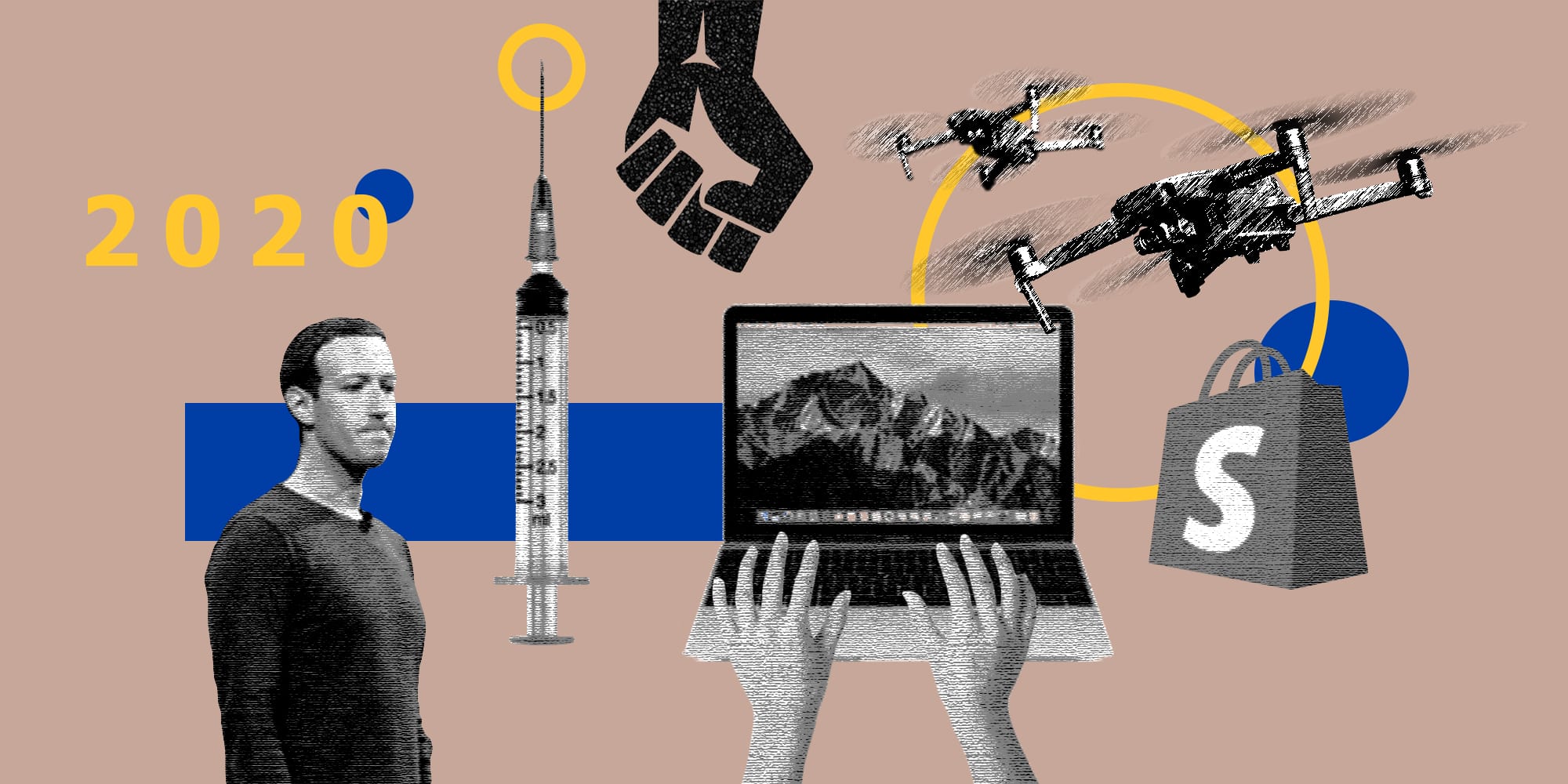 While COVID-19 ruled the headlines, this past year was also oddly defined by hope, scientific progress and solidarity.

At least we got the crash out of the way. Unlike the Roaring Twenties (a decade of optimism that ended in ruin), the 2020s began on an inverted note as the pandemic exacerbated society’s worst problems. Things can only go up from here, no? With COVID-19 vaccines rolling out, a new American president dedicated to international recovery, and nine solid years to save the planet, we may yet get a chance at the Roaring Twenties 2.0.

In fact, while the headlines have been relentlessly grim, this past year has also seen large doses of hope, scientific progress and solidarity. From a city that refused to be bullied by Big Tech to the lightning development of viable vaccines to the Canadian innovation community standing up to racism, there’s actually plenty about 2020 worth celebrating.

Vaccines arrive to end the war on COVID-19

Like a cavalry charging over the hill, the COVID-19 vaccines are finally here. Developed in record time — 10 years of work achieved in 10 months — they come from years of research, billions of dollars in investment, and unprecedented collaboration between public and private institutions. The AstraZeneca/University of Oxford candidate, for example, was built on the lessons learned from the 2015 Ebola outbreak; its funding, manufacturing and delivery a result of tireless coordination between the United Kingdom, several European-Union countries and multinational companies.

Other safe and effective vaccines are already being administered around the world, with plenty more in the latter stages of testing and trials. Still, challenges remain for Canada. The Pfizer vaccine, which was first administered in Quebec City on December 14, must be stored at -70°C and requires two doses taken 21 days apart. Meanwhile, Moderna’s version (set for widespread approval over the coming days and weeks) can be kept in a regular freezer and requires two shots, four weeks apart. Rolling out the doses will be a massive task, and the World Health Organization claims that $100 billion will be needed to inoculate everyone. Candidate to candidate, it’s still not known if vaccinated people can infect others, or how long immunity will last. But let’s repeat: COVID-19 vaccines are finally here.

Takeaway: Hope is not lost when the world bands together.

Could anyone have guessed that a snowboard shop would become Canada’s largest public company? Well, that’s what happened in May when BNN Bloomberg reported that Shopify had usurped RBC as the country’s most valuable corporation. Then Shopify announced it planned to funnel some of those profits into socially responsible causes. In June, as Black-Lives-Matter protests tore across America, CEO Tobias Lütke announced that his company would be donating $1 million to anti-racist causes (some critics found the move hypocritical, however). And this past September, the Shopify Sustainability Fund poured U.S.$5 million into 11 cleantech companies working in carbon reduction.

Takeaway: You can reach the top without trampling people along the way.

Let’s be honest. The tech industry has a spotty history when it comes to diversity. In Canada, women, Indigenous peoples and visible minorities are less likely to be employed and face wage gaps, especially when compared to white men. It’s enough to make you want to rise up and do something. So, that’s what the country’s most prominent tech professionals did in June, forming the Coalition of Innovation Leaders Against Racism (CILAR). Chaired by TD’s head of cybersecurity Claudette McGowan, with entrepreneurs, academics and policymakers from across sectors, CILAR wants to promote tech opportunities for Black people, Indigenous peoples and people of colour. That involves focusing on five key pillars: youth skills development, job opportunities, venture and founder support, investment and funding, and community leadership.

Takeaway: If Canada’s tech ecosystem wants to go global, it must look like all people.

2020 saw tremendous advancements in transportation not seen since your favourite sci-fi movie. First, Toronto-based startup Air Matrix began testing its invisible highways in the sky for drone-powered delivery. Next, Virgin conducted the first-ever hyperloop passenger test (you’ve seen it; you still don’t believe it) in the Las Vegas desert. Then Elon Musk took the entire planet for a series of wild rides when SpaceX connected with the International Space Station, launched a Sirius XM satellite into orbit, and gleefully exploded a bunch of stuff. (Just some typical R&D in the service of eventually colonizing Mars.) With many other leading Canadian companies working in similar areas, the future of mobility is certainly on the move.

The coronavirus crisis highlighted how vulnerable our healthcare system truly is. To avoid crowded waiting rooms and system collapse going forward, most experts agree that a historic amount of money must be invested into virtual healthcare companies and infrastructure. And that’s what happened. In July, insurance giant Sun Life Financial backed Montreal’s Dialogue to the tune of $43 million which, in turn, allowed the startup to grow 10-fold and reach millions of new users. And then, just as children started going back to school, Toronto-based Maple secured $75 million from Shoppers Drug Mart to expand its team and services. “10 years of change in one month” is how healthcare workers the world over are describing 2020’s telemedicine revolution — and it couldn’t have come soon enough.

Takeaway: Pandemic or not, the future of health increasingly lies in our homes and phones, not hospitals and clinics.

If smoke suggests fire, then maybe years of investigation into the market dominance of Big Tech’s four largest corporations — corporations that are together worth more than the GDP of most countries — suggests monopoly. But don’t tell that to the CEOs. Back in July, Jeff Bezos (Amazon), Mark Zuckerberg (Facebook), Sundar Pichai (Alphabet) and Tim Cook (Apple) virtually testified before U.S. Congress to defend the legality of their companies. And it was intense. Politicians hurled accusations of theft, leftist favouritism and consumer abuse; the CEOs argued tech-sector competition has never been higher and that their products hold socio-economic importance. Thinkers like Margaret O’Mara were not convinced. A historian at the University of Washington, O’Mara asserts that tycoons like Bezos are not long for this world, that all innovation companies are supplanted by something else and that, inevitably, antitrust legislation will arrive to break up the party. The U.S. Justice Department is hoping to complete its own investigations of the four corporations by 2021.

Takeaway: No one is above lawmakers, not even the corporations that manufacture their phones.

After almost three years of trying to convince people he wasn’t trying to profit from residents’ data or steal public land or put local startups out of business or demand a shiny LRT line, Sidewalk Labs CEO Dan Doctoroff took one mask-filtered whiff of COVID-19 and shelved plans to develop the Quayside neighbourhood. “We’re going to build a smarter city, not necessarily a smart city,” Waterfront Toronto chair Stephen Diamond told The Globe and Mail in July. Diamond now wants the new Quayside, and whatever innovations happen to live there, to address Toronto’s greatest needs: elder care, affordable housing and a renewed small-retail market. Subtle as this shift may be, it’s a concession that new technologies (and precious real estate) should advance citizen welfare whenever possible.

Takeaway: If governments want private partnerships to work, public interest must be top of mind.

Remote work invades all aspects of our lives

Do people like remote work? On the one hand, it’s given employees of all stripes newfound freedom, with some surveys reporting that 80 percent of people expect to work out-of-office a minimum of three days per week, even when the pandemic subsides. On the other hand, remote work has also brought with it Zoom fatigue, logistical headaches and, for many, brutal spells of depression and loneliness. Advocates state that remote work is the way of the future, and technology will eventually iron out wrinkles like lag time and that uncanny sensation of existing in a two-dimensional space. Detractors believe nothing will replace authentic human interaction — the serendipitous encounters; the immediate gratification of making your colleagues laugh — and, hey, the pandemic will be over in a few months anyway, right? No matter where you stand, nobody seems to have the answer to this conundrum. So, just as you did during every waking moment of 2020, it’s best to wait and see how this battle plays out.

Takeaway: Remote work is here to stay. Unless it’s not.

The robots are rising and taking our jobs, and that’s not necessarily a bad thing. While lots of Canadians worry automation will lead to mass unemployment (if not the apocalypse as depicted in The Matrix), optimists assert that smart robots will be the greatest job engine in history. Until then, let’s start slowly. This past June, Sobeys began its Voilà service, which gets robots to assemble online-grocery orders before they’re delivered with minimal handling. A couple weeks later, Canadian-American startup Gatik launched a fleet of autonomous vehicles to deliver groceries from Walmart’s warehouse in Arkansas to neighbouring businesses. (The company plans to run a similar service in the new year with Loblaw stores.) This month, Amazon unveiled its four-passenger robo-taxi for navigating “dense, urban environments.” And if you’ve recently walked the streets of Toronto, there’s a good chance you’ve met or stepped on Geoffrey, the adorable takeout-delivery robot named after University of Toronto professor Geoffrey Hinton, widely regarded as the godfather of A.I. Geoffrey doesn’t look so malevolent, does he?

Takeaway: Robots aren’t evil, however, you might want to avoid a career as a driver.

As soon as doctors confirmed that the risk of coronavirus spread was negligible when exposed to fresh air, many of the world’s largest cities doubled down on the creation of public space. Even Toronto seized the moment, installing 40 kilometres of new bike lanes, 57 kilometres of streets closed to cars, and thousands of curbside patios in support of bars and restaurants. The city’s Digital Main Street program also enlisted tech companies like Ritual and Quickbooks to help small businesses digitize their operations. “Public health has always been the foundation of urban planning,” former Toronto chief planner Jennifer Keesmaat told MaRS back in July. “Some people just forgot.” Remember when pundits predicted that COVID-19 would spell the death of cities? That prophecy never panned out, and Keesmaat is more than sure that “good, safe density” will help eradicate future diseases and increase overall quality of life.

Takeaway: Cities will be safer and more beautiful than ever before. See you outside in 2021.

A chance to build a more sustainable future